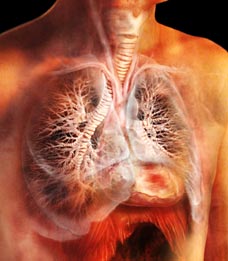 Our methods could potentially generate false-positive results in two ways. The first is that by reading the TBN-ST before 48 h, we could erroneously interpret a reaction not due to delayed hypersensitivity as a positive reading. Immediate hypersensitivity reactions to PPD occur in approximately 2 percent of people who receive PPD and resolve by 2 h. Since there were only 13 patients whose results were based on readings before 8 h, this would suggest that at most 0.02 X 13, or less than one of the reactions were due to this reason. Jones-Mote and Arthus reactions can last for up to 24 h but are so rare that they are of little clinical significance.
The other way by which our methods might have generated false-positive results is due to our definition of a positive TBN-ST as 5 mm or greater of induration at an early reading. However, as described earlier, using a 5-mm cutoff for 24-h readings results in a specificity of 97 percent. Additionally, there were only 23 patients defined as reactors based on early readings of 5 to 9 mm induration. These results suggest that there were few false-positive readings due to the 5mm cutoff.
Using the Rapid Tuberculosis Screening Program, we were able to screen 95 percent of our patient population, and using extrapolations which appear to be valid, our skin testing regimen achieved a sensitivity of approximately 75 percent when compared to the recommended 48- to 72-h reading.