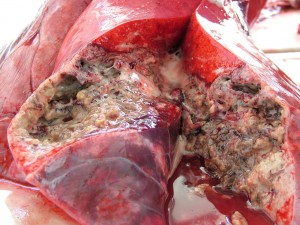 The two estimates of the true prevalence of reactors in our study population, 23.1 percent and 25.7 percent, are in close agreement. Averaging the two, 24.4 percent is the final estimated prevalence of true tuberculin reactors in our study population. Using this number, we can estimate the sensitivity of our method for both the whole study population and for patients whose tests were read at various times (Table 2).
Table 2 shows that the likelihood of obtaining a positive TBN-ST decreases markedly if the TBN-ST is read before 24 h, presumably because the number of false-negative results increases the earlier the TBN-ST is read. As can be seen, only 9.6 percent of the patients who had the TBN-ST read before 24 h had a positive reading, resulting in an estimated sensitivity of 39 percent. In contrast, 22.3 percent of the patients who had the skin test read between 24 and 47 h had a positive reading, resulting in an estimated sensitivity of 91 percent. The estimated sensitivity for the whole study population was 75 percent.
Analysis of Cost
The major cost of this screening program consisted of the fees resulting from the 301 chest roentgenograms. This amounted to approximately $50,300 during the 18-month study period, resulting in a savings of about $193,000 when compared to the potential cost of chest roentgenograms for all 1,456 patients who were entered into the study (about $243,300). The administration of the symptom questionnaire and the performing of and reading of the TBN-STs resulted in a time demand on the nursing staff amounting to approximately IQ min for each patient. This compared favorably with the 40 min or more that had in the past been required to bring each patient (often in active labor) to and from the radiology suite.