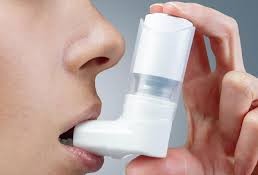 When the above considerations are taken into account, it seems that for aerosol therapy we require as ideals: (1) aerosol MMAD <5 to minimize oropharyngeal deposition, (2) slow, steady inhalation, and (3) a period of breath-holding on completion of inhalation. These ideals are hard to achieve for metered-dose inhalers (MDIs), partly because of the nature of the spray itself, and partly because of the difficulties many patients have in using MDIs.

The spray released from an MDI consists of large droplets of propellant within which the drug itself is enclosed either as a solid crystal or as a liquid. Although the drug particles or droplets have MMADs between 2 and 5 y,, the effective MMAD may exceed 40 \i at the actuator orifice. Although the propellants evaporate as the droplets move away from the canister, evaporation is not instantaneous, and some unevaporated propellant may coat the drug even after several seconds. Further, the initial velocity of the propellant droplets exceeds 30 nrsec, although they slow down on encountering air resistance. Because of the large effective aerosol size and the rapid droplet velocity, most of the spray (^80 percent of the dose) impacts in the oropharynx, and only about 10 percent of the dose penetrates to the lungs.

Deposition of aerosols released from MDIs have been measured by direct gamma-labeling of a bron-chodilator, by inert radio-labeled particles or droplets, and by pharmacokinetic studies. Lung deposition data are summarized in Figure 1. The various studies are in agreement that only about 10 percent of the dose reaches the lungs. This small percentage of the dose appears to be responsible for most of the therapeutic effect of aerosol bronchodilators or corticosteroids. The local impaction in the oropharynx of corticosteroid aerosols from MDIs may give rise to local side effects, ie, oropharyngeal candidiasis or dys-phonia.

If MDIs were used properly, then the small amount of drug deposited in the lungs would generally be sufficient for a full therapeutic effect. Deposition in the lungs and therapeutic effect can be maximized by firing the MDI during the course of slow (30 L-min”), deep inhalation, followed by 10 seconds of breath-holding, although even under these circumstances no more than about 15 percent of the dose reaches the lungs. Unfortunately, most patients do not use MDIs in the ideal way. In a survey of 130 patients observed while using their inhalers, over 30 percent could not coordinate firing the aerosol with inhalation, over 50 percent did not inhale slowly and deeply, and over 50 percent did not breath-hold adequately. These errors would result in less aerosol reaching the patients lungs and a reduced therapeutic effect. Failure to inhale sufficiently deeply may also constitute poor inhaler technique. At worst, a patient may actuate the aerosol while exhaling or after completing inhalation, and it is probable that no aerosol would be deposited in the lungs under these circumstances. Other patients stop inhaling when the cold propellant spray is fired into the mouth, and again it is unlikely that much aerosol will reach the lungs. 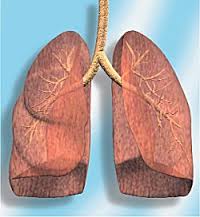 propellant droplets were produced at the higher vapor pressure. This is of potential interest, since the vapor pressures of commercially available MDIs vary considerably from brand to brand, and it is likely that the amount of each drug reaching the lungs will vary according to the propellant formulation.

Probably the most practical way of altering the size distribution of metered-dose aerosols, and hence the pattern of deposition, is to “age” the aerosol by passing it through an extension device (spacer or holding chamber) attached to an MDI. These devices range from 10 to 25 cm in length, and from <100 cm to >1,000 cm in volume (Table 2). Some contain valves in the mouthpiece to control inhalation and exhalation. Several devices are available commercially, one of which (Nebuhaler, Astra Pharmaceuticals) has a conical shape similar to that of the spray cloud. If an aerosol is inhaled from an MDI via an extension device, the propellant droplets are allowed to evaporate before reaching the patient, so that oropharyngeal deposition is reduced by an amount that depends on the design of the device. Oropharyngeal deposition may be as little as 5 percent of the dose with the Aerochamber, representing a 14-fold reduction compared to an MDI. This should reduce the incidence of local side effects with corticosteroid MDIs. Other devices, such as “open” tube- or cone-shaped spacers, which do not have valves in the mouthpiece, may only reduce oropharyngeal deposition from 8 to 60 percent of the dose. The reduction in oropharyngeal deposition occurs because many large droplets which would be deposited in the oropharynx are retained within the extension device.

Deposition of aerosol in the lungs may be increased by extension devices to levels comparable to those achieved with a correctly used MDI, although even under the most favorable circumstances, no more than about 20 percent of the dose will be deposited in the lungs. Spacers and holding chambers place less demand on patients’ inhaler techniques, since for many of these devices the spray can be fired into the extension device and then inhaled without the patients needing to coordinate. These devices can give adequate lung deposition of metered-dose aerosols even in patients with poor inhaler technique, although there must be correct and incorrect ways of using these devices also, which have not been investigated fully so far. Patients who can use an MDI perfectly are unlikely to derive extra benefit from extension devices, even though the lung dose may be increased. The amount of aerosol reaching the lungs from a holding chamber will be inversely related to the amount deposited within the device itself.

Deposition patterns from one type of holding chamber (InspirEase, Key Pharmaceuticals) are shown in Figure 2, obtained using radioaerosol particles released from MDIs. With an MDI alone most of the dose is deposited in the oropharynx and swallowed, but with InspirEase, a 700-ml collapsible bag into which the spray is fired and from which the patient subsequently inhales, lung deposition is somewhat increased, and oropharyngeal deposition reduced by a factor of 8. Approximately 60 percent of the dose is retained within the bag, chiefly by impaction on the end wall.

Placing the inhaler several centimeters away from the open mouth may perform a function similar to that of the extension device, since the propellant droplets can slow down and evaporate somewhat before reaching the oropharynx. Lung deposition may be enhanced by this maneuver, although in clinical practice some patients may accidentally spray the aerosol partly onto the lips and face. 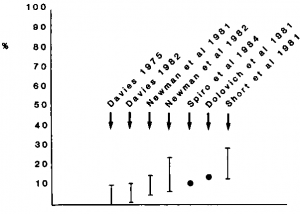 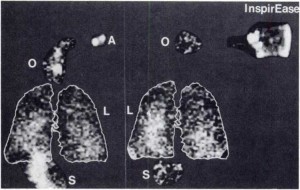 Figure 2. Deposition patterns with or without the InspirEase (Key Pharmaceuticals) in a normal subject, obtained using ^Tc-labeled Teflon particles delivered from an MDI. The edges of the lungs are delineated from ventilation scans using the inert gas ““Kr. The views are posterior-anterior. O = oropharynx, A=actuator, L=lungs, S = stomach.