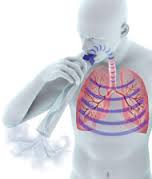 This 72-year-old man with longstanding chronic asthmatic bronchitis and Kaposis sarcoma, involving only the integument, was admitted on July 12,1982 for evaluation of a new pulmonary infiltrate. The patient had been on prednisone at varying dosages (5-20 mg) for two years, in addition to oral terbutaline, aminophylline, inhaled isoetharine, and chlorprom-pamide. One year previously, he developed histologically proven Kaposi s sarcoma involving both lower extremities up to the lower thighs. Because of progressive bilateral leg edema and severe paresthesias, he underwent radiotherapy (Cobalt-60) treatment, to these areas for a total midline dosage of 2,500 rads.

A new cluster subsequently appeared in the left lower eyelid which received similar radiotherapy treatment. Symptoms in the lower extremities progressed, and the patient was placed on a three-week course of topical 0.01 percent mechlorethamine; the disease, however, continued unabated. Finally, he was started on intravenous vinblastine in three-week pulses, which was continued until the date of admission.

Three weeks prior to admission, the patient developed an increase in his usually nonproductive cough. The radiograph obtained is illustrated in Figure 1.

Asthma, diabetes, and cortisone ingestion have long been known to predispose to unusual infections; in addition, Kaposis sarcoma itself has recently been associated with acquired immune deficiency syndrome (AIDS). Therefore, this particular case presents an intriguing differential diagnosis: consideration must be given to disseminated tuberculosis, pyemic abscesses, coccidioidomycosis, histoplasmosis (or other granulomatous infections), phycomycosis, candidiasis, and cytomegalovirus. Although AIDS is also associated with Pneumocystis carinii and Herpes simplex, this distinctly nodular radiographic pattern would be atypical. Finally, neoplastic disease, such as lymphoma, sarcoma, and hematogenous metastases, must also be considered. 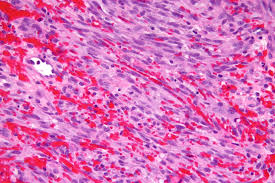 The patient underwent an extensive work-up to evaluate both the extent and nature of this infiltrative disease. A transbronchial lung biopsy of the right middle lobe obtained via bronchofiberscopic examination (Fig 2) revealed alveoli with adjacent bronchial cartilage. About the cartilage were areas of fibrovascu-lar proliferation with hemosiderin deposition; this stroma was edematous with extravasated blood cells.

These findings were consistent with metastatic Kaposi’s sarcoma. In addition to the pulmonary and integumentary involvement, endoscopy revealed gastric mucosal disease as well. Although no distinctive symptoms had developed, the patient was started on combination intensive chemotherapy. Follow-up to date shows inexorable proliferation in both lung fields radiographically.

Kaposi described this sarcomatous disease of often multifocal origin in 1872. Since then, multiple reports have described this intriguing entity in various forms. An endemic form noted in Ugandan blacks has some rather distinctive features. DiGiovanni and Safai reviewed 93 cases at Memorial Sloan-Kettering Cancer Center and confirmed the high incidence of this disease among Ashkenazi Jews, as well as Italian-born persons. Of special note was the high rate of second malignancies (30 percent), diabetes mellitus (16 percent), and anemia (8 percent). A resurgence of Kaposi s sarcoma in homosexual men, in addition to Pneumocystis carinii pneumonia, mucosal candidiasis, and perianal ulcerative Herpes simplex lesions, has aroused new speculation as to the etiology of this disease.

Many of these patients have evidence of cytomegalovirus infection; Giraldo et alu have demonstrated serologic association between Kaposis sarcoma and this DNA virus. Whether this association is primary or rather a result of the acquired immunocellur deficiency syndrome (AIDS) is yet to be resolved. However, it is apparent that in this setting, Kaposi s sarcoma may be more aggressive.

There is no curative treatment of Kaposi’s sarcoma, although surgery can eliminate isolated lesions. Cutaneous lesions are radiosensitive; however, this modality is restricted by the risks of radiation damage and necrosis when there are wide areas of involvement.

Pharmacologic therapy in the past included many compounds: arsenicals, testosterone, estrogens, corticosteroids, and antibiotics. Presently, significant response has been reported in nodular skin tumors when treated with chemotherapeutic combinations of actinomycin D, vincristine, and imidazole, carbox-imide (DTIC). Few data are as yet available for satisfactory treatment of the disseminated form. 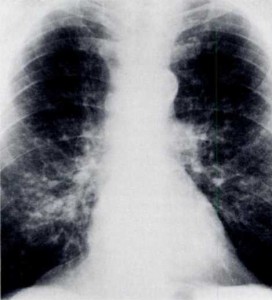 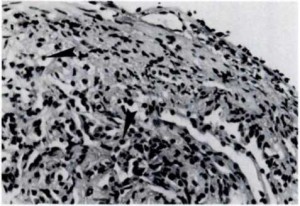