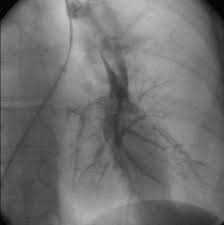 Discussion
This study confirms that thrombolysis is the net result of 2 opposing processes, lysis of preformed fibrin and accretion of new fibrin on the lysing thrombus. In this study, increasing bolus doses of rt-PA were injected into rabbits with experimental venous thrombi, and both fibrinolysis and thrombus growth were evaluated. The results confirmed the fibrinolytic efficacy of rt-PA given as a bolus. However, they also showed the original finding that fibrin still accumulates on thrombi after bolus rt-PA administration. Lysis of fibrin and accretion of new fibrin on the thrombi were accurately quantified. After the highest bolus dose of rt-PA, a thrombolytic rate of over 80% was observed, corresponding to a residual thrombus size of 57 fig. However, 28 |xg of radioactive fibrin still accumulated on the thrombi. This amount is approximately 50% of that accumulated on the thrombi produced in salinetreated rabbits and 50% of the whole thrombus fibrin content 3 h after the rt-PA bolus. These results indicate the importance of new fibrin accretion on the thrombi after bolus rt-PA in determining the final thrombus size.
From the previous experiments, it appears that to reduce the thrombus size, a positive balance between lysis and growth of the thrombus is necessary. Two options could be pursued. The first is to enhance the fibrinolytic activity of plasminogen activators. The second is to inhibit the accretion of new fibrin on the thrombi during thrombolysis.