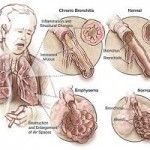 In this study, the relationship between the arterial lactate concentration and VO2 during exercise was obtained in a large group of COPD patients with a wide range of functional status and compared with that of normal subjects of similar age. We found that the increase in lactate was abnormally high in the majority (70%) of COPD patients, despite evidence of limitations in ventilation and gas exchange during exercise. In addition, the deterioration in functional status was accompanied by a progressively steeper slope of the La/ VO2 relationship. This may reflect gradual worsening in skeletal muscle oxidative capacity as the functional status and, presumably, the level of daily activity decreased.