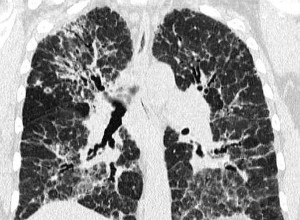 Bronchoalveolar lavage was performed as previously reported. Briefly, 50 ml of physiologic saline solution was introduced to the segmental bronchus of either the right B4 or B5 through the fiberoptic bronchoscope, followed by suction at low pressure. This procedure was repeated three times. A transbronchial lung biopsy (TBLB) was performed from parenchyma through right B8a or B9a at the same time following the BAL.
Bronchoalveolar lavage, ТВ LB, and CT scan were performed during the same period of a symptomatic phase, within two weeks after hospital admission in all patients.
Analysis of Cellular Composition in BAL Fluid
Composition of BAL cells was estimated on a cytocentrifuged smear with Wright’s stain; 10 ml of 1X 10®/ml BAL cells was placed into a Petri dish and nonadherent lymphocytes were separated for further evaluation. To determine T-cell population, a direct immu-nofluorescent method was employed using FITC-labeled monoclonal antibodies; 0.1 ml of 5x 10* lymphocytes was incubated with corresponding CD3, CD4, or CD8 antibody for 30 min at 4°C. Immunofluorescence flow cytometry was performed (FACScan model 440, Becton & Dickinson).