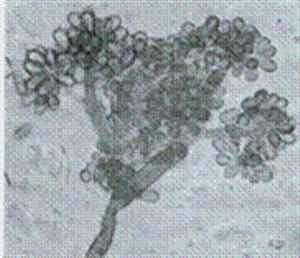 Results
Lung Fibrosis in Hypersensitivity Pneumonitis
Lung fibrosis of grade 2 was found in 9 of 17 patients (fibrosis group), 5 patients with the bird fanciers disease, and 4 of 6 patients with HP of unknown antigen (Table 1). The other eight patients showed no lung fibrosis (nonfibrosis group). All cases evaluated were categorized into grade 2 for cellular infiltration at the symptomatic phase when CT scans and other evaluations were made (Table 1). Figure 1 displays a CT scan from a patient in the nonfibrosis group (Fig 1A) and one from the fibrosis group (Fig 1B). Figure 2 shows the histologic findings of the TBLB materials of the same cases shown in Figure 1. The presence of fibrosis was in agreement with CT scan and pathologic condition in all cases, although the extension of fibrosis was hardly evaluated by histologic examinations. Lung fibrosis assessed by CT scans was categorized into grade 2 in all cases suggesting that lung fibrosis associated with HP was difiuse. However, the fibrosis had a tendency to be localized in the subpleural lesion of dorsal segments (subpleural curvilinear shadow) in some cases at the later stage of the disease as observed in lung fibrosis of other lung diseases. All cases of HP without lung fibrosis were also confirmed by histologic examination of TBLB specimens except for two cases of summer-type HP. 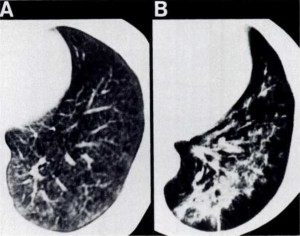 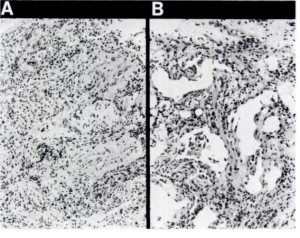