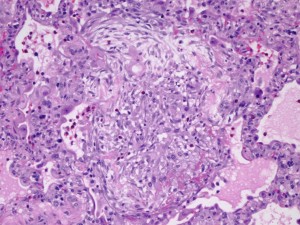 Although the reduced lymphocyte and neutrophil levels in the BAL fluids of the fibrosis group were consistent with the chronic nature of the disease, the number of lymphocytes was nevertheless increased above the normal ranges, indicating that the disease was still active. The determination of the T-lympho-cyte subsets revealed that increased lymphocytes were predominantly CD8 +. CD8 + cells were significantly increased in the nonfibrosis group but CD4+ T lymphocytes were not increased as compared with the fibrosis group (Table 3). Figure 3 shows the differences of CD4/CD8 ratio between two groups. The significantly higher ratio of CD4 to CD8 in the fibrosis group is obvious.
In addition, the fibrosis group revealed an insidious onset by history suggesting that long-term exposure of small amounts of antigen might lead to the development of lung fibrosis (Table 1). These results suggested that long-term exposure induced a relative increase of CD4-positive cells as compared with an increase of CD8-positive cells at the early stage.
Discussion
Hypersensitivity pneumonitis is an immunologic lung disease resulting from exposure to one or more of a variety of organic environmental agents. The diagnosis of HP depends on relating a history of exposure to the causative antigen and immunologic evidence of antibodies to the antigen with the clinical respiratory symptoms. Other evidence such as histologic features of biopsy specimens and cellular immunity to the antigen is generally observed. Our present study included several cases of HP of undetermined etiology. 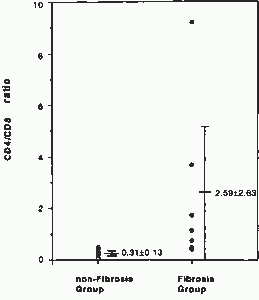