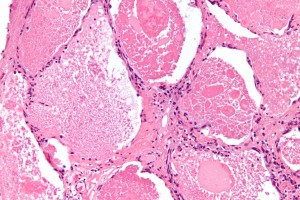 In addition, the chronic stage of bird fanciers lung has been reported to develop pulmonary fibrosis and have CD4+ T-cell-dominant BAL findings. In the present study, the fibrosis group revealed that the onset was insidious and the clinical symptoms to the home environments were not severe but mild. These observations lend support to the hypothesis that longterm and continuous exposure induced CD4+ T-cell dominant reactions in which active alveolitis may progress to lung fibrosis.
On the other hand, summer-type HP is seldom accompanied by pulmonary fibrosis despite repeated episodes, and has been reported to have remarkably high percentages of CD8+ T cells in BAL fluids at the acute phase. These findings were also confirmed in our study, revealing that the fibrosis group, which mainly comprised bird fanciers lung and HP of unknown antigens, had CD4+ T-lymphocyte-domi-nant lung involvement, whereas the nonfibrosis group, which mainly comprised summer-type HP, had high percentages of CD8+ cells in the BAL fluids. In addition, the case of isocyanate HP that had been reported elsewhere had remarkably elevated CD8 + T cells in the BAL fluid in both symptomatic and asymptomatic phase (also can be considered as chronic stage), and showed clinical improvement without pulmonary fibrosis despite continuous exposures to the antigen. Yoshizawa et al reported that predominant CD8+ T cells in BAL fluids in the acute stage shifted to the predominant CD4+ T cells at the quiescent stage even in summer type HP. However, the summer-type HP cases did not develop lung fibrosis during a period of time over two years either because the overall immunologic processes do not cause fibrosis or perhaps because the cases are identified sooner.