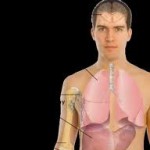 Eating studies: Eating studies were conducted during either the noon or evening meal. Meals were standard hospital fare with no attempt made to control for nutritional or caloric content. Patients were studied on two consecutive days, with active eating (AE) and passive eating (PE) occurring in random order. During AE, patients ate normally at their own speed. During PE, patients were seating comfortably with hands on their laps and were fed by a research assistant. Continuous monitoring and computerized recording of SpO2 using a pulse oximeter (OhmedaBiox 3700, Colorado) was obtained before and during eating. The recording electrode was placed on the left middle finger and sealed with tape to secure the sensor. A pilot study had shown that meals were usually completed within 20 mins. Therefore, the control premeal period was always 20 mins. The patient sat comfortably in a chair during this time before commencing the eating study. SpO2 monitoring was terminated when the meal was completed. Patients were asked to record dyspnea using a 10 cm visual analogue scale before and upon completion of eating. Measurements and definitions: Premeal or control saturation was the average SpO2 for each patient during the 20 min control period. A mean pre-eating SpO2 was then calculated for the 35 patients; this was used in analyzing the results (mean SpO2:control). Similarly, eating saturation was defined as the average SpO2 during the meal period for each individual, and a mean SpO2 was obtained for the entire study group (mean SpO2:eating).