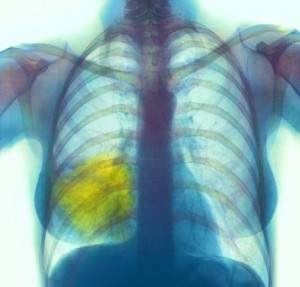 Specimens were inoculated on lowenstein-Jensen cultures and Middlebrook 7H11 medium and since February 1990, specimens were also cultured in Bactec 12B vials (Becton Dickinson and Company, Towson, Md). Colonies of Л/ gordonae were smooth and yellow pigmented. Acid-fast bacilli (AFB) stains were done on submission of the specimens, colon) counts were performed to estimate quantity in 11 patients. The AFB stains were repeated on positive cultures from Bactec systems, Iowenstein-Jensen, and 71111 cultures. Final identification of all identified specimens was achieved with specific nucleic acid probe analysis (Gen-Probe, San Diego, Calif), which differentiated Mycobacterium avium complex,  tuberculosis, and other MOTTs. In vitro sensitivities were not performed since it has not prosed to be cost effective. Therapy was started empirically by different infectious disease consultants.
Our patients were stratified into three groups. Colonization was defined as a positive culture in the absence of clinical disease. Possible disease was defined as a triad of the following: (1) clinical symptoms for more than 2 weeks (cough, expectoration, dyspnea, fever, chills, weight loss, night sweats) not attributable to another disease process; (2) radiographic abnormalities; and (3) one or more positive cultures from respiratory sites (modified from Ievine and Chaisson). Dissemination was defined as isolation of M gordonae from commonly sterile sources or isolation of M gordonae from two or more noncontiguous sites.
We excluded from the analysis one HIV-positive patient (stool culture with one colony) and one HIV-negative patient (sputum culture positive) because the hospital charts could not be located.