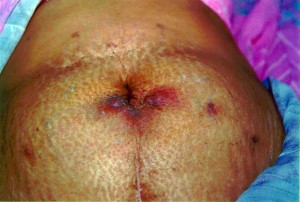 We found two HIV-positive patients with dissemination (patients 1 and 2): one had mycobacteremia with one positive blood culture and one had positive cultures of a bone marrow aspirate, a synovial fluid aspirate, and three positive sputa with repeatedly high colony counts. The latter had evident signs of mycobacterial disease with hilar, mediastinal, and abdominal lymphadenopathy, and hepatosplenomegaly as shown by CXR (Fig 1), CT scan, liver scan, and gallium scan (Fig 2), which could not be ascribed to another disease process. Patient 2 could have had an additional bacterial infection that responded to antituberculosis therapy, but additional cultures of the blood did not reveal other organisms. Improvement of his radiographic infiltrates was also noted. Both patients had far advanced HIV-related immunosuppression; both became afebrile and their symptoms resolved with antituberculous treatment (Table 2).
Twelve patients had possible disease (patients 3 through 14). Additional features consistent with M gordonae disease were quantified positive AFB stains of specimens (patients 11 and 14), abnormal gallium scans (patients 6, 8, 10, 12, and 13), and/or histologic evidence of granulomatous disease (patients 9 and 13).
Seven patients had no evidence of disease (patients 15 through 21). Thirteen of the 14 patients with dissemination or possible disease had pulmonary disease, 11 with abnormal CXRs and 2 with abnormal gallium scans and normal CXRs (patients 8 and 12). 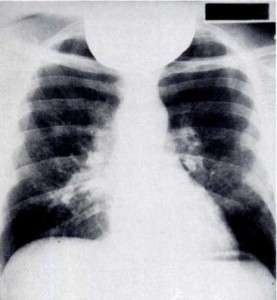 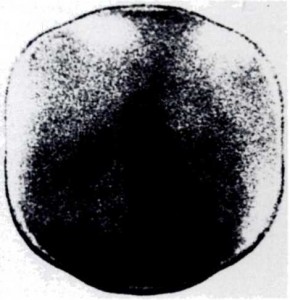