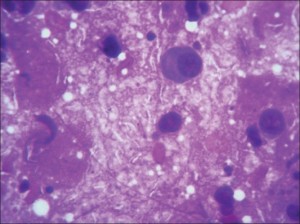 Mycobacterium gordonae, named after the American bacteriologist Ruth E. Gordon, also called M aquae or the tap water bacillus, belongs to the group of mycobacteria other than tuberculosis (MOTT). It is classified in Runyon group 2 as a scotochromogenic organism. Within the MOTT group it is one of the least pathogenic organisms; it is slowly growing, is not virulent in mice, and antituberculosis therapy is usually not recommended.
The human immunodeficiency virus (HIV) epidemic has changed the scenario and historically nonpatho-genic organisms like Mycobacterium avium complex and M kansasiP may disseminate in HIV-positive patients. Patients receiving therapy improve clinically, and survive longer. Whether M gordonae is pathogenic under this new scenario remains unknown.
We observed an increase in M gordonae isolates in an area with a high prevalence of HIV infection and M tuberculosis infection. We describe the clinical features and the disease course in patients with HIV infection who were found to have cultures positive for M gordonae. This group was compared with a concurrent group of HIV-negative patients with similarly positive cultures. The results led us to question whether M gordonae can still be considered a non-pathogenic organism in all circumstances.