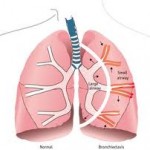 In this study, we extended the analysis of SBWSM manoeuvre in smokers by evaluating the simultaneously measured disappearance curve of carbon monoxide. The three-equation diffusing capacity for carbon monoxide (DLcoSb-3EQ), measured from four equal and sequential aliquots of the total alveolar gas sample, was also affected by manoeuvres that altered the distribution of ventilation in the lung periphery in normal nonsmoking subjects . Compared with the predicted carbon monoxide washout for a uniform lung model, the carbon monoxide concentration was higher than expected early in exhalation and lower than expected later in exhalation in normal subjects for SBWSM ma-nouvre without breath holding. This resulted in a reduced DLcosb-3EQ when calculated from the first alveolar sample early in exhalation but an increased DLCOSB-3EQ when measured from the fourth sample at near residual volume (RV) in normal subjects. These differences in DLcosb-3EQ among small alveolar gas samples were attributed to time-dependent carbon monoxide concentration gradients in the lung periphery because the effect largely disappeared with short periods of breath holding .

We wished to determine whether the changes in DLcosb-3EQ among small alveolar gas samples were abnormal in smokers with otherwise relatively normal lung function. We hypothesized that smoking would magnify the degree of nonuniformity (DI) of DLCOSB-3EQ measured from small alveolar gas samples at 0 s of breath holding in smokers, particularly for SBWsm manoeuvres. As well we thought that DI would correlate with increases in peripheral ventilation inhomogeneity in smokers using the normalized phase III helium slope , but would disappear with short periods of breath holding .