The fibroblasts are usually aligned in parallel, and immunoperoxidase staining indicates that they express smooth muscle actin but retain the intermediate filament phenotype of fibroblasts (vimentin, but no desmin) (Fig 3). The fibroblasts are enclosed by a pericellular matrix that contains fibrils of a cellular fibronectin isoform containing an extra type III homologous repeat, the EIIIA domain, not found in plasma fibronectin. The fibrils containing fibronectin are identical to structures described in healing wounds as microtendons or fibronexi, which are thought to anchor the contractile bundles of the myofibroblasts to the collagenous matrix (Fig 4). 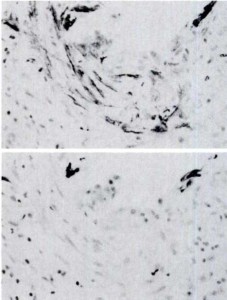 Figure 4. Electron micrograph of a fibroblast in a fibroblastic focus of UIP. An extracellular “microtendon” (mt) is stained by 5-nm gold particles conjugated to antibodies to fibronectin. The microtendon is aligned with an actin bundle (a) in the cytoplasm and collagen fibrils (at right) (X 33,000).