Sarcoidosis confined to the airway masquerading as asthma: CASE PRESENTATION (1)

A 32-year-old woman was to have excision of a benign goiter when the distal trachea appeared abnormal during fiberoptic intubation. While still under general anesthesia, the authors were called to evaluate her for the first time. A review of her chart revealed dyspnea on exertion and nonproductive cough for three months. Her primary care physician had noted wheezing on examination and prescribed albuterol as needed and triamcinolone acetonide inhaler two puffs (100 |lg/puff) tid after making a clinical diagnosis of asthma. However, she continued to make emergency room visits. Her compliance with this regimen was unknown. On examination in the operating room, she had a 3 cm by 3 cm right-sided goiter and diffuse inspiratory wheezing, on the left side more than the right. She was a nursing student who had smoked one pack of cigarettes per day for 10 years but had quit three years earlier. She did not use illicit drugs, and occupational history was otherwise negative. Chest x-ray (CXR) and computed tomography (CT) of the chest, completed within one week before admission, are shown in Figures 1A and 1B, respectively.

Flexible bronchoscopy was performed, which revealed erythema and nodularity of the mucosa involving the trachea and extending to the main stem bronchi. The left main stem bronchus was severely narrowed (Figure 1C). The bronchoscope could not be advanced beyond the level of the left upper lobe orifice. Endobronchial biopsies were performed and surgery was cancelled. 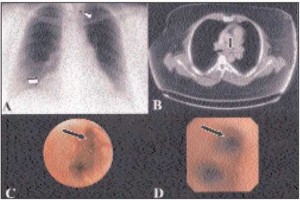