Sarcoidosis confined to the airway masquerading as asthma: DISCUSSION (1) 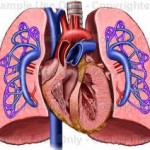 The first case of endobronchial involvement in sarcoidosis was reported in 1941 . Spirometry showed that obstruction was common (40% by current criteria) , while broncho-scopic evaluation showed a wide spectrum of involvement, including longitudinal stenosis and mass-like lesions . Our patient had disease confined to the airway without intrathoracic adenopathy, atelectasis or parenchymal pulmonary infiltrates, and this was confirmed by CT scan of the chest. We found only two cases with similar presentations in which CT scan was performed. In the first case, “the hila appeared somewhat prominent” on CT of the chest, and extrapulmonary disease was also present on physical examination . In the second case, CT showed “small areas of atelectasis” . These findings were not present in our patient, but thickening of the left main stem bronchus was seen on CT of the chest (Figure 1B).

Endobronchial bronchoscopic biopsy in airway sarcoidosis often provides the characteristic but not diagnostic histological findings in up to 75% of cases, especially when the mucosa appears abnormal . Other etiologies of noncaseating granulomas were ruled out in this patient by a complete history for possible exposure to dusts, antigens and pathogens, as well as by serologies and repeated cultures of bronchial specimens. The patient’s goiter was an unlikely cause for her respiratory symptoms, as evidenced by a normal FVL performed after improvement of symptoms. She had a needle aspiration three years earlier that was not compatible with sarcoidosis.