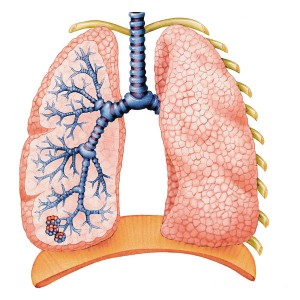 The Deo reduction that was the most frequently found abnormality, in our nonsmoking studied patients (55 percent) is consistent with the prevailing concept that the parenchyma is the main site of abnormality in lung involvement in scleroderma. It is noteworthy that in our patients, there was no difference in the mean age, disease duration, disease form, and serologic features among those with and without pulmonary involvement. This indicates that the above parameters are not associated with the presence of pulmonary involvement in systemic sclerosis, although recent reports refer higher prevalence of positive serologic features and in particular, of anti-SclTo antibodies in lung involvement of scleroderma.
A mild obstruction of the large airways, expressed by reduced FEV/FVC, due mainly to peribronchial inflammation and fibrosis, has been considered a late and uncommon feature of pulmonary involvement. We also found only one patient (3 percent prevalence) having reduced FEVi/FVC. Low prevalence has also been reported by Me Carthy et al who found only 2 of 34 studied patients with scleroderma with obstructive disease. Bjerke et al did not find any patient among 22 nonsmoking scleroderma patients with obstructive disease, while Steen et al found only 6 among 77 studied nonsmoking patients.