Operator experience was similar for each randomization group: the average number of postgraduate training years of experience for the conventional and ultrasound-guidance groups, respectively, were 6.67 ± 1.95 (SD) vs 6.23 ± 2.01 years.
All patients were cannulated with four or fewer passes, using two-dimensional ultrasound, yielding a site failure rate of 0/12 (0 percent; 95 percent confidence interval: 0 to 22 percent). This was significantly better (p<0.05, Fishers exact test) when compared to the six of 17 (35 percent; 95 percent confidence interval: 14 to 61 percent) site failure rate when conventional guidance was used (Fig 3). 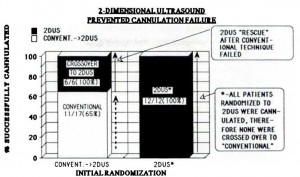 Figure 3. Two-dimensional ultrasound (2DUS) improved successful cannulation from II of 17 (65 percent) to 12 of 12 (100 percent) during initial randomization (p<0.05, Fisher’s exact test). Six of 17 patients randomized to conventional (CONVENT) technique could not be cannulated during five or fewer needle passes, and hence were crossed over to attempts with 2DUS. All six were then successfully cannulated with 2D US assistance.