Smoking is by far the most significant risk factor for COPD, and its effects are potentiated by age. As described by Fletcher and Peto , FEV1 in susceptible smokers does not begin to diverge significantly from the normal range of decline until about 35 years of age, typically after 20 years or more of smoking, but then falls precipitously compared with normal values (the “horse-racing effect”, Figure 1). Fletcher et al developed the horse-racing analogy to suggest that those with the worst function (ie, lowest FEV1) at a single observation are deteriorating more rapidly before measurement and will continue to do so. The underlying pathophysiology associated with smoking appears to gather momentum with age. Smoking cessation at any point along the acceleration curve results in normalization of the rate of decline in lung function. Thus, it seems logical to intervene as early as possible. 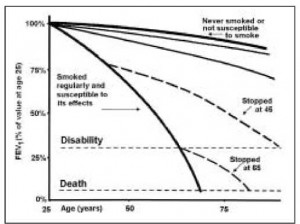 Figure 1) Fletcher and Peto proposed the “horse-racing effect” in the rate of decline of lung function in smokers. Smokers who are not susceptible to smoke have a similar rate ofdecline to that of nonsmokers. Susceptible smokers do not begin to diverge significantly from nonsmokers until about 35 years of age after many years of smoking; from that point on, the fall in forced expiratory volume in 1 s (FEV1) is precipitous. Adapted with permission from reference 17