The Lung Health Study showed the beneficial effects of early intervention . The five-year multiclinical study comprised 5887 smokers with mild to moderate airflow limitation in the United States and Canada. Its purpose was to determine whether smoking intervention and the use of a bronchodilator would slow the rate of decline in FEV1 in early COPD. As seen in Figure 2, successful intervention had remarkable benefits on lung function. Sustained quitters showed absolute improvement at one year, and the benefit continued to increase over the five years of the study compared with the results in continuing smokers. The investigators concluded that smoking cessation results in a substantial benefit to lung function and is the most important intervention in smokers with mild COPD. 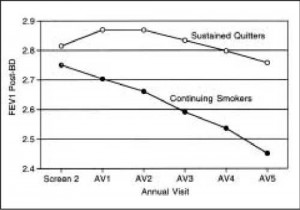 Figure 2) The effect of smoking intervention in the Lung Health Study is shown. Sustained quitters exhibited absolute improvement in forced expiratory volume in 1 s (FEV1) at one year, and the subsequent rate of decline in FEV1 improved throughout the five-year observation period compared with that of continuing smokers. BD Bronchodilator. Reproduced with permission from reference 2. Copyrighted 1994, American Medical Association