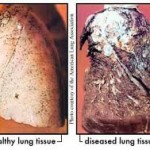 The Lung Health Study also showed the benefit of proactive smoking intervention in patients with mild COPD. The sustained quit rate in the special (active) intervention group over five years was 22% compared with only 5% in the usual care (control) group. According to the investigators, the sustained rate of 22% was among the highest ever reported for a major study. The rate still seems discouragingly low, however, considering that patients were fully apprised of the serious implications of their spirometry results and underwent an intensive 12-week smoking cessation program, followed by an aggressive relapse prevention program throughout the remainder of the five-year study. While the study was certainly a “triumph” in its demonstration of the benefits of smoking cessation in patients with mild COPD, it neither showed that spirometry results themselves are a significant motivating factor in sustained smoking cessation nor, conversely, did it evaluate whether the finding of normal spirometric values might encourage smokers in their habit. Moreover, the Lung Health Study’s limited objective of screening smokers over the age of 35 years did not afford an opportunity to assess the social usefulness of mass spirometry screening in the general population at risk.