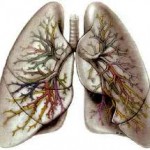 Health Study, in which over one-third of the participants were women, baseline FEV1 was found to be a significant predictor of subsequent decline in FEV 1 in both male and female continuing smokers . In the same study, interestingly, methacholine reactivity (although not an appropriate choice as a screening tool) at the start of the trial was found to be a particularly strong predictor of deteriorating lung function in smokers, regardless of baseline lung function. Furthermore, women with borderline to moderate airflow limitation were found to be significantly more reactive than men . The sex differences were independent of differences in age, cigarette use or asthma; they were largely explained by the lower absolute FEV 1 in women, which was felt to be a surrogate for a smaller airway calibre .